The World-building for Shards of History, a guest post from Rebecca Roland

Please, say hello to Rebecca Roland, who is here today to tell us a little bit of research she went into writing her novel, Shards of History. Welcome, Rebecca!
The world building for Shards of History came together over time. Shards of History began as a short story at the Odyssey Writing Workshop. At the time, I'd been away from home for a few weeks and was definitely beginning to feel homesick, and so part of New Mexico crept into the setting. The story and the place loomed large in my mind, and so a few months after returning home I wrote a novel-length rough draft expanding on the short story.
I submitted the first few chapters for critique. They were the strongest chapters of the entire novel, but even then they needed clarity. My biggest problem was that I hadn't yet put enough thought into the world that my characters lived in, and my readers, smart as they are, picked up on that. So I spent a lot of time asking questions and researching. I used the Science Fiction and Fantasy Writers of America's handy dandy list of world-building questions as a guide. You can find it here if you're interested.
With a rough draft of the novel in hand, I finally pegged the theme of the story, and then used that as the starting point for figuring out what sort of culture my characters lived in. This is the point when I went through the list of questions on SFWA's website, figuring out little details such as how people greeted one another and interacted, and bigger details such as economics and who held the power in each group of people. I researched matriarchal societies, weapons, and the flora and fauna that could possibly live in the story's world. I wrote entire scenes that showed cool details of the world and how people interacted which then ended up being cut because they didn't pull enough weight. I ended up with pages upon pages of notes, many of which I used in the story, and many of which I didn't. Hopefully this added depth to the story and made the world feel larger and richer.
As for the physical world itself, the setting was inspired in part by the Valles Caldera, a volcanic caldera in northern New Mexico. I knew I wanted to set my story in a large valley. The caldera is isolated, surrounded by mountain peaks and pine, fir, and aspen with a huge grassy plain in the center. The government took over a private ranch in the caldera about a decade ago. The buildings still stand, and I believe a handful of people still live there to care for the place. When I visited, a few horses were grazing in a pasture near a sprawling ranch house with a view of the valley. It felt like I'd stepped back in time to the old West.
Multnomah Falls in Oregon also inspired part of the setting and the story. It was easy to imagine the winged Jeguduns of the novel flying around the falls. Standing at the bottom of the six hundred and twenty-foot falls, I felt tiny and just a little afraid imagining what it would be like way at the top, looking down. I wanted to incorporate that fear and sense of being small in the face of nature into the novel.
Thank you very much, Rebecca! 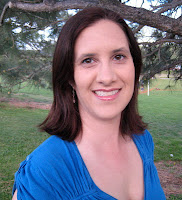 Rebecca Roland lives in Albuquerque, New Mexico, where she writes
primarily fantasy and horror. Her short fiction has appeared in Uncle
John’s Flush Fiction and in Stupefying Stories, and she is a graduate
of the Odyssey Writing Workshop. When she’s not writing, she’s usually
spending time with her family, torturing patients as a physical
therapist, or eating way too much chocolate. You can find her online
at Spice of Life, her blog, or follow her on Twitter @rebecca_roland.

Summary
Like all Taakwa, Malia fears the fierce winged creatures known as
Jeguduns who live in the cliffs surrounding her valley. When the river
dries up and Malia is forced to scavenge farther from the village than
normal, she discovers a Jegudun, injured and in need of help. Malia’s
existence--her status as clan mother in training, her marriage, her
very life in the village--is threatened by her choice to befriend the
Jegudun. But she’s the only Taakwa who knows the truth: that the
threat to her people is much bigger and much more malicious than the
Jeguduns who’ve lived alongside them for decades. Lurking on the edge
of the valley is an Outsider army seeking to plunder and destroy the
Taakwa, and it’s only a matter of time before the Outsiders find a way
through the magic that protects the valley--a magic that can only be
created by Taakwa and Jeguduns working together.

Now Malia is in a race against time. She must warn the Jeguduns that
the Taakwa march against them and somehow convince the Taakwa that their real
enemy isn’t who they think it is before the Outsiders find a way into the valley
and destroy everything she holds dear.
Goodreads
Publisher's page
Facebook
Twitter
Email Post
Labels: guest post rebecca roland