Interview with Bryce Moore, the author of Vodnik, and INT Giveaway! 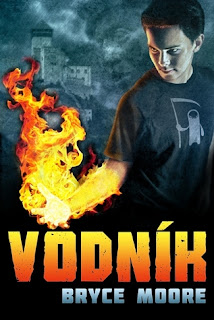 Bryce Moore works as a librarian in western Maine. His wife is Slovak, and they are raising their children to be bilingual in English and Slovak. Moore has lived in Trenčín, Slovakia, where his brother-in-law, much like Uncle Ľuboš in Vodník, works at Trenčín Castle. Moore studied creative writing at Brigham Young University. This is his first novel. Visit him online at brycemoore.com

Hey folks!
You remember how last week I posted a raving review of Vodnik and urged you to read it? Well, after little bit of stalking and harassing  research, I've contacted Bryce and asked if he would be interested in coming to NBR to talk about his book, and he graciously agreed. Hopefully, this will persuade you of his awesomeness *winking*

Hi Bryce! I very much enjoyed your debut YA novel Vodnik which had such an unusual setting like Slovakia. Will you tell me how the whole idea of writing Vodnik was born? 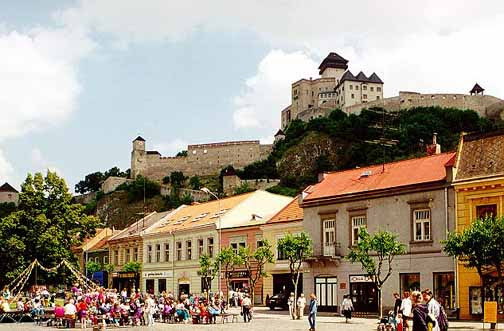 My wife is from Slovakia, and I first went to the country after we were married. She grew up in Trencin (actually in the same exact apartment Tomas lives in in the book--that's where we stayed on our first trip. In Tomas's room). I got to spend a month in the city, and I just adored it. It was so different from the other European cities I'd been to. Smaller. More intimate. And there were all these great details that were so foreign. The tour Tomas goes on in the beginning of the book is just about exactly what I did on my first day in the city. My wife's brother is a night watchman at the castle, and he took us all sorts of places normal tourists weren't allowed to go.


Trencin is definitely a castle town, and I'm definitely a castle guy. I love cities that are dominated by their castles. Salzburg is like that, on a bigger scale. Trencin has the same feel. I was already writing regularly, and I thought right away how it would make a great setting. And then my wife showed me the vodnik statue and explained what it was. Again, that was something that really struck a chord with me. A creature who drowns children and stores their souls in tea cups? How delightfully strange! And here was a fountain devoted to that creature in the middle of town, and children loved to come play in it. I thought a vodnik would make a great villain for a book.

Those two elements--the vodnik villain and Trencin as a setting--stayed with me until they finally came together in what you can read today.

Now, Vodnik himself reminded me of Mad Hatter from Alice in Wonderland, he is so delightfully unhinged, witty and very cunning. Did you base him on any particular character/real person and was he easy or difficult to write?

Interestingly enough, he came to me very easily. I'm a huge Woody Allen fan. I love quirky. I love how neurotic Allen can be in a lot of his movies. In the first few scenes I wrote with the vodnik, I made him much more sinister. Evil. (Actually, I had a vodnik as a villain in the second book I ever wrote. It took place in medieval Slovakia and didn't work at all.) But the villain wasn't working for me. Then my wife explained that vodniks don't view themselves as evil or good. They just do what they do. As soon as she said that, I realized that the vodnik didn't think  of himself as bad. He was doing people a favor. And since he didn't have to be evil, he could be just a regular guy. I tested out a Woody Allen-esque voice for him, and it just worked. I never looked back.

What made you give Tomas his Roma origins?

I submitted Vodnik to Tu Books (my publisher) back when it was Tu Publishing, and its core mission was to publish books about cultures outside the normal Western European tropes we read so much of. That fit Vodnik to a tee. Tu was bought by Lee & Low, and the mission was tweaked slightly to focus more on people of color. One thing that had stood out to me on my trips to Europe was how different racism is viewed in Europe. It's much more open. There's very little in the way of PC when it comes to Germany and Slovakia. I lived in Germany for two years, and I've had many discussions about this with my Slovak wife.

It's hard not to see how rough the Roma have it over in Slovakia. That was something I noticed on my trips to the country. And it felt wrong to me. Deeply wrong. It's a complicated situation, and I realize that, but to hear some of the things said about Roma in the country . . . made me angry. Upset that people could be raised to believe things like that. That was another thing that stood out to me in the years after I'd been to the country and on my trips back. I didn't like it, but there wasn't much I could do about it. Right?

Then when Tu shifted its focus, I suddenly wondered if I might be able to change things in the book. Make Tomas have Roma roots. I reread my draft, and I realized there were other things I wanted to change, too. I did a couple of massive revisions, and I feel like the book is much stronger for it. Ideally, I'd love for Vodnik to get published in Slovak one day. Not because I have any notions that it would change the situation, but hopefully people might read it and start to question their own prejudices.

How about Death in The Modern Day? I love that manual, plus the whole idea of intermixing bits of it with each chapter was brilliant! Is there a story behind its creation? Since the book is all in Tomas's point of view, I needed a mechanism for introducing plot elements and setting details in a way that wasn't boring. Death in the Modern Day was the answer to that. Originally, I had most of those snippets in the actual text itself, but I started to realize that that was bogging down the book too much, so I shifted them into the chapter headings. Then things really worked well. As for the tone, one of my favorite musicals is How to Succeed in Business Without Really Trying. There's a book in that that has the same sort of snarky, know-it-all tone. I wanted to parody some of that, but take it further. This is death we're talking about, after all. I imagined it would be full of red tape, but also keep insisting how simple it really was. Death in the Modern Day grew out of that.

Tomas is quite a movie geek, I loved his constant quotes and comparisons between films and real life. Does he have his top ten films that everyone MUST see?

Wow. Now THAT is a great question. I don't know if he'd be able to rattle off a list that limits it to his top ten. Maybe top ten in a genre (comedy, action, sci-fi)--but even then, he'd really start to squirm. How to pick favorites like that? With that disclaimer, I think he'd say some fantasy movies everyone MUST see are (in no particular order) But he'd probably be debating those for the next few hours or days, taking some off, adding others on, wondering if Star Wars is really fantasy or sci-fi, and if Back to the Future belongs on the list or not, and which Pixar movie he should have put on there. In the interest of time, I'll just leave it at that.

Will we see more of Tomas in the future? Are you working on anything else at the moment?

I hope we get to see more of Tomas, but that depends on how well Vodnik does. I took a trip to Slovakia this past summer to do research, and I definitely have lots of ideas for sequels. I really hope I get to write them. In the meantime, I finished a YA Noir Fantasy called Tarnhelm that my agent is shopping around right now, and I'm working on a YA heist book right now. Sort of Ocean's Eleven meets Mistborn. It's a ton of fun to write.

At last, who came up with the cutest grim reaper I've ever seen? *grinning* Who was your cover designer, Bryce? 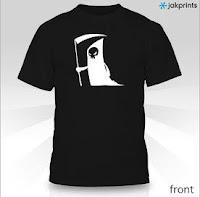 Isaac Stewart was the cover designer, and he really hit it out of the park. He actually blogged about the process, which you can read here. He's also done the maps for various fantasy books, as well as artwork for Brandon Sanderson. As for the grim reaper on the cover and throughout the book, that would be an artist by the name of Ozan Tekin. I wanted to make some T-shirts like the one Tomas is wearing on the cover. While I wasn't able to line up Ozan's picture for the art, I did get an artist friend to do an awesome version of one, which I hope to make available soon. You can check it out here--glow in the dark! :-)

Thank you so much, Bryce! I hope everyone had fun with this interview. Bryce also generously agreed to provide an ecopy of his novel to ONE reader, and of course this giveaway is OPEN WORLDWIDE.

Summary
When Tomas was six, someone — something — tried to drown him. And burn him to a crisp. Tomas survived, but whatever was trying to kill him freaked out his parents enough to convince them to move from Slovakia to the United States.

Now sixteen-year-old Tomas and his family are back in Slovakia, and that something still lurks somewhere. Nearby. It wants to drown him again and put his soul in a teacup. And that’s not all. There’s also the fire víla, the water ghost, pitchfork-happy city folk, and Death herself who are after him.

If Tomas wants to survive, he'll have to embrace the meaning behind the Slovak proverb, So smrťou ešte nik zmluvu neurobil. With Death, nobody makes a pact.