Hey, peeps!
You might have noticed that I've been lax this week updating the blog on time.
I apologise, we are swamped with chores on the farm, it's hot, and I just don't have it in me to write reviews at about 10 in the evening when we finally slow down. I need mindless entertainment instead.
Thank God for Eurovision, right? :))) 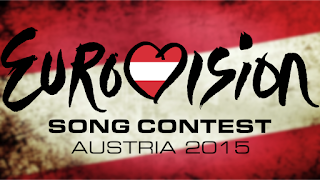 I caught up with all the videos at last and here is my take:

Sweden
Loved it. Very catchy, very indie and such a simple concept.

Hungary
Sweet and simple, but I personally found it boring. They were playing it really safe.

Germany
Another Anastasia-like voice, but God, what a boring video and song.

Switzerland
What a mess! They crammed so many different concepts together. A native-Indian get up for a girl in white in the forest, a flute and 80's guitar in the background... and oh my god, the chorus was bad!

Estonia
It started promising. The dude has Nick Cave-type of voice, but the gal is no Kylie Minogue. Take her away, leave him in, she was torturing my ears. And the song is boring....

Serbia
No, no, no! Beauty Never Lies is a rip off of Beautiful by Christina Aguilera, but it's a BAD ONE. You've been warned. The director of that video should have been shot. Seriously, it was bad.

France
France as usual went for simple classic, but it always plays safe. Watch only if you like Patricia Kaas's style. I personally found this very boring.

F.Y.R. Macedonia
Dude has good voice,  not  a bad song. Not impressed with the video. Honestly, I'd rather stare at people than drawings.

Australia
First of all, what Australia is doing on Eurovision?! Otherwise, classy, a little bit funky, but very grey video-wise.

San Marino
Well, I suppose for San Marino it's good, but otherwise the song was a mess. They are teenagers, give them something less boring to sing for God's sake! It was like listening to a Christian song.

Russia
What's with these inspirational videos on Eurovision?! Nice voice, but a song more suitable for a charity foundation or a a big Christmas relief song. I found it pretty boring, sorry, mother-Russia

Azerbaijan
Good voice, but another inspirational video. I'm ready to slit  my wrists. Dude either dresses in front of the video, stays in his flat or looking out from the balcony. What the hell?

Albania
I don't know why but I half like the singer. Song is a bit busy, but it's about regular women, and I enjoyed that.

Czech Republic
Another wrist slitting song. Although that guy is a hulk, yum! He should have been singing rock, instead of sad pop duets.

Moldova
Yes! That's the eurotrash I've been waiting for. Phew, I'm relieved! Although darling, I think, she is a bit old for you. And I've never seen traffic patrol cops as hot as her...Oh I see, it was a teenage wet dream.

Norway
These two were gorgeous. Beautiful, deadly song, classy surroundings. Hey, Scandinavia rules so far! This one made me happy.

Austria
Is it me, or the dude is trying to be the guy from White Stripes? It's alright, but not my cup of tea. Very tame.

Latvia
She is skinny little thing, isn't she? Again, not bad, quirky and simple. Like it.If she was in a dubstep video, I'd snatch it in an instant.

Greece
Kill me now. One of those brainless supposedly tearjerkers.

Israel
I think he fancies himself Justin Timberlake. Well, he ain't one. On yes, the middle-eastern tunes came in. Hello, eurotrash! *grinning madly*

The Netherlands
Well, I applaud the older couple dynamics, but the song itself has a teenage feel, sorry. Her voice is creepily very young, while she is obviously in her late forties. Weird.

Iceland
Normal pop song. *yawn* I don't even know if she is singing about herself or the country in general? Very Disney-like feel.

Armenia
Slitting my wrists again. Is it some sort of remembrance thing? First of all, how many of singers there are? I lost count. Secondly, f*ck that, my ears can't deal with it.

Belarus
Okay, this will be one of Eurovision hits :) Can't help it, the guy reminds me of a dark elf with his weird ear attachments/jewelry. Pretty cool in a eurotrashy way. You just have to see it for yourself.

Georgia
Sorry, but I like it. It's about women kicking ass. Watch the video :)

United Kingdom
Bless them, they really tried. *pats shoulder* I appreciate the effort, but no, God, no!

Lithuania
They were going for cutesy, but it didn't work. They are most definitely not Mumford & Sons.

Finland
As usual, Finland doesn't give a rat's ass. This was a big middle finger towards Eurovision. With an awesome message!

Ireland
Molly, you are very decent, but unfortunately not very exciting, sorry..

Italy
Anything said in Italian sounds beautiful, but I am not a fan of pop-opera. Skipping forward.

Cyprus
Nice song, but there is no life in it. Flat as a pancake.

Here you go. Nothing personal, peeps, I don't have anything against certain countries, this is just my taste.

I hope Belgium wins.
What about you?

In fact I'm going to watch them again.
Thanks for reading this!
Tchau!